Home » Blog » What Are Cataracts? 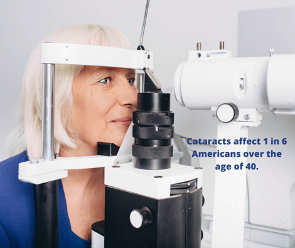 According to the American Academy of Ophthalmology, a cataract is a dense, cloudy area that forms in the lens of the eye. A cataract begins when proteins in the eye form clumps that prevent the lens from sending clear images to the retina. The retina works by converting the light that comes through the lens into signals. It sends the signals to the optic nerve, which carries them to the brain. A cataract develops slowly and eventually interferes with your vision. You might end up with cataracts in both eyes, but they usually don’t form at the same time.

Aging is the most common cause. Did you know that in the US alone, cataracts affect over 20 million adults 40 and older and half of all seniors age 80 and up? This is due to normal eye changes that happen to start around age 40. That is when normal proteins in the lens begin to break down, which causes the lens to get cloudy. People over age 60 usually start to have some clouding of their lenses. However, vision problems may not happen until years later.

Other reasons you may get cataracts include:

Most age-related cataracts develop gradually. Other cataracts can develop more quickly, such as those in younger people or those in people with diabetes.

Listed below are some vision changes you may notice if you have a cataract:

How To Slow Down Your Development Of Cataracts

Protecting your eyes from sunlight is the best way to do this. Wear sunglasses that screen out the sun’s ultraviolet (UV) light rays. You may also wear regular eyeglasses that have a clear, anti-UV coating. Talk with your eye doctor to learn more.

If you have noticed changes to your vision like the symptoms we listed above, it is a good idea to come in for an eye exam. In this modern age of incredible medical advancements, there is no reason to ignore your eye health. Give us a call today to learn more or to schedule an appointment!
229.244.2068

Are you a candidate for Cataract Surgery?
Take our self-test.

Are you a candidate for LASIK?

Schedule an
Appointment
WARNING: Internet Explorer does not support modern web standards. This site may not function correctly on this browser and is best viewed on Chrome, Firefox or Edge browsers. Learn More.